Growing up in North Korea, Yeonmi Park did not know of the concepts of love or friendship.

Everyone was a “comrade” and feelings of adoration were reserved for the rogue regime’s supreme leader alone. Her parents never told her they loved her.

It was part of everyday life to see people dying of starvation on the streets and with no electricity, Park’s life was ensconced in total darkness and freezing cold.

Park is just one of several hundred North Korean defectors who have escaped to the United States after she and her mother fled in 2007 when she was just 13 years old.

Now aged 26, the Chicago woman is a human rights activist and in an interview with The Post this week, described the hell that is growing up in one of the world’s most brutal dictatorships, calling it a modern day Holocaust.

“What you need to know about North Korea is that it’s not like other countries like Iran or Cuba,” she said. “In those countries, you have some kind of understanding that they are abnormal, they are isolated and the people are not safe.”

As children, Park and her sister were taught that the late supreme leader Kim Jong Il and his son Kim Jong Un were gods that had the power to read people’s thoughts, making everyday citizens too afraid to speak or think ill of the brutal tyrants.

In school, children are taught to count using metrics like “American bastards” and are forced to do “criticism sessions” where they attack and find faults in their classmates, sewing mistrust and division.

“We don’t have friends in North Korea. We only have comrades. There’s no concept of friends,” she said.

While the world is familiar with Kim’s deadly nuclear testing program, Park is one of the few defectors who have made it out alive and are able to blow the whistle on the horrific conditions inside the rogue regime.

Roughly 40 percent of the country’s population, more than 10 million people, are starving and face severe food shortages, according to the United Nations.

A North Korean boy walks along a path in front of a village in south of Kaesong, North Korea 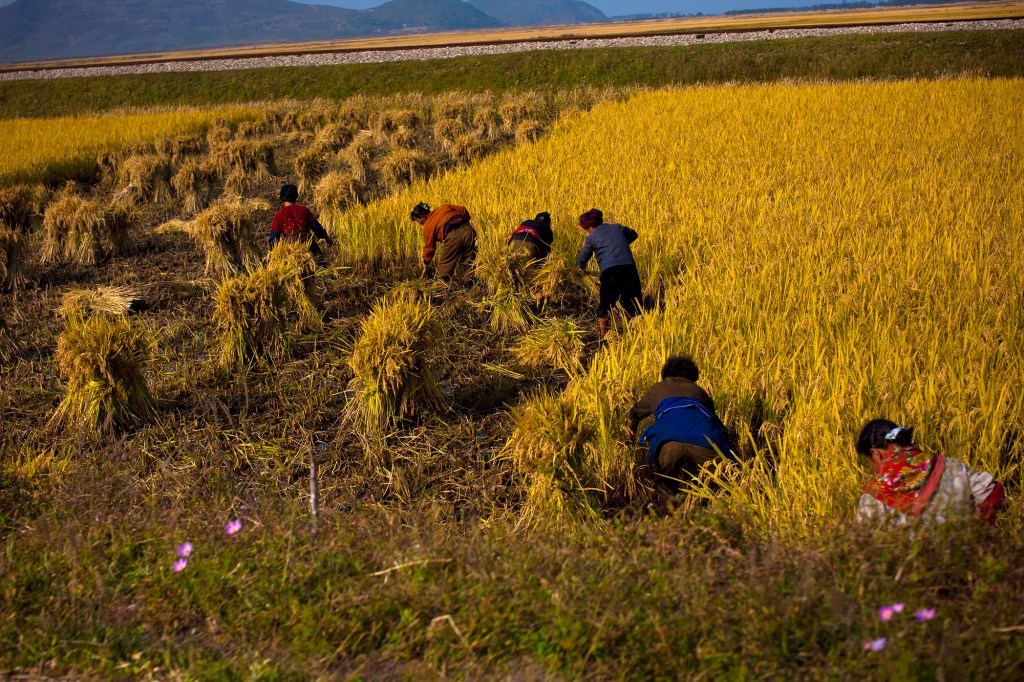 Park describes growing up eating insects to survive and blames the ruling Kim family for letting their people starve to death. Both her uncle and grandmother died from malnutrition.

“You’d see so many people just dying. It was something normal for us to see the dead bodies on the street. It was a normal thing for me. I never thought that was something unusual,” she said.

“North Korea spends billions of dollars to make this nuke test system. If they would spend just 20 percent of what they spent on making nuclear weapons, nobody would have to die in North Korea from hunger but the regime chose to make us hungry.”

After fleeing at the age of 13 and crossing into China over the frozen Yalu River, Park’s mother was raped by human traffickers. They were both sold to Chinese men, with Park’s first owner paying less than $300 for her.

The pair searched hopelessly for Park’s older sister who fled the dictatorship earlier. They managed to smuggle Park’s father across the border but he later died of colon cancer.

With the help of Christian missionaries, Park and her mom fled to Mongolia, crossing the Gobi Desert and eventually finding refuge in South Korea where they were reunited with her sister.

Park continued her education in Seoul before moving to New York City in 2014 where she began speaking out against Kim Jong Un’s regime, at great risk to her own safety. Many of her relatives have disappeared.

“I don’t know if they’ve been executed or sent to prison camps, so I’m still not free. Even after I went through all of that to be free, I’m not free to dictators there. So it’s a very emotional thing for me,” she said.

In an interview with The Post, Park called on the international community to condemn China’s sponsorship of the regime and said her sources in Pyongyang have confirmed that Kim is alive and well despite reports he is in a coma.

he human rights activist has since settled in Chicago where she lives with her husband and young son.

Despite her harrowing story, she is grateful to have been born in North Korea.

“If I hadn’t been born in that oppression and complete darkness, I don’t think I would see the light here. I think people here, they don’t see the light and only see darkness and for me I see so much light,” she said.

“I feel so grateful that I can experience a country that is like a different planet.”

Biden Takes Trump’s Favorite Line Of Attack, And Fires It Right Back At Him

September 24, 2020 0
Michael Conforto will wait to hear the prospective new owner’s plan before counting his money. Steve Cohen’s “to do” list this offseason, should he receive...

Massachusetts Construction Worker Dies From Eating Too Much Black Licorice